With the success of Operation Moked during the opening stages of the Six-Day War; Dassault Aviation couldn’t have paid for a better advertisement of their Mirage III CJ (also known as the Shahak or Skyblazer in Hebrew to the Israelis).

Check out the Mirage Fighter Flight in the online store here…

Developed during the 1950s, it was the first European-built fighter designed to exceed Mach 2 during horizontal flight. Eager to attract potential buyers, Dassault invited members of the Israeli Air Force (or IAF) to visit their factory; test the new aircraft and provide feedback. And with the addition of the MiG-21 to the Arab arsenal, Israel placed an order for the Mirage in 1959. Seventy Mirage III CJ fighters were delivered to the Israelis between April 1962 and July 1964.

While the French version of the Mirage was designed to intercept high-level bombers, the Israeli requirements were for a tactical fighter interceptor and therefore contained more fuel tanks and two DEFA cannons. The Mirages of the IAF were best known for their performance during Operation Moked; the pre-emptive strike on Arab airfields with the intent of destroying the Arab air force on the ground.

Despite the success of Moked, the Mirage performed admirably during the remainder of the war; downing a further forty-eight Arab aircraft that had survived the initial airfield attacks. With the threat of the Arab airforces largely neutralised the Israeli army was able to rely on regular ground support from their high-flying cousins. Whilst the actual release date of Fate Of A Nation is still a couple of weeks away (June 30th) we have opened up the website so you can start placing your pre-orders now. To celebrate our return to this period of history we will also be having a Launch Sale. The sale will apply to everything in the store, with the exception of the Book, Army Deals and Unit Card Packs.

Whether you are looking to add some new units to your existing armies, or start a completely new one now is a great time to take advantage of the 25% Discount Launch Sale. The 1967 Six Day War and 1973 Yom Kippur or October War were epic in scale and brutal in intensity. The stakes were high for all sides. For Israel it was a matter of survival. If the Syrians or Egyptians broke through they could be in Israeli towns in less than an hour. For the Egyptians and Syrians it was a matter of credibility. Failure could bring down either government. For Jordan, caught between pressure from Arab governments and Israel, it was a balancing act to keep the nation together.The wars featured a wide variety of forces, battles and terrain. Actions ranged from hundreds of tanks duelling on the flat Sinai desert, to Israeli paratroops storming Jerusalem’s Old City, Egyptian commandos re-crossing the Suez Canal, and Syrian and Jordanian forces trying to take or hold the steep escarpments on the Golan. The tank battles on the Sinai Peninsula and Golan Heights were the largest to occur since World War Two. In 1967 both sides were equipped with a collection of begged, borrowed and captured weapons and tanks. By 1973 rising Cold War tensions saw both sides increasingly equipped by the USA and Soviet Union with their latest aircraft, missiles and tanks.

Fate of a Nation allows you to choose your preferred nation and force, then guide your force to victory. As the Israeli commander, can you, like General Tal, carefully deploy your veteran tanks and infantry to hold off the enemy? Or as the Arab player will you, like General Shazly, form an effective battle plan to take advantage of your numbers and new weapons to force back the Israelis? 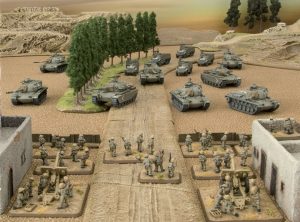 What You Get In The Book?
Fate of a Nation is published by Osprey Publishing, and is designed to be a complete stand-alone game, fully compatible with the companion ‘Nam book. The book includes a full set of the rules that are identical to the rules in our new ‘Nam rulebook, featuring gun teams and sustained artillery bombardments added to the core Team Yankee rules.The book has a greatly expanded range of force lists compared to the previous Fate of A Nation book for Flames of War Version 3. Players can choose between a larger force of 1967 units, or a smaller, harder hitting force with 1973 equipment. Notes in the unit descriptions indicate which weapons were available at each time, allowing players or competition organisers to build themed forces to 1967 or 1973 if they wish.  The number of force organisations has been expanded from 9 Company and Battalion sized forces to more than 30. A full range of Syrian army forces has been added, including the 1967 Golan defence force and the 1973 armour and infantry formations. There is a full set of combat missions included, similar in format to those in the ‘Nam book. They are based on the V4 Flames of War mission types, such as Encounter, Hasty Attack and No Retreat. Mission special rules including mines, night fighting and entrenchments. ‘Nam players could also use these missions to play a wider range of combats with ‘Nam forces. The missions are followed by illustrated painting guides for each nation. Lastly there is a catalogue of all the Battlefront miniatures that you can use to field Fate of a Nation armies.

What’s New?
The conversion of Fate of a Nation to the Team Yankee game system enables the rules to be streamlined, and tactical differences between armies brought out by differences in their command and morale ratings. This greatly reduces the large number of special rules that were a feature of the V3 edition of Fate of a Nation.  Overall the game is more streamlined and faster to play, without any reduction in the number of tactical options.

Israeli forces retain excellent Command and Morale ratings, the full range of 1967 tanks and infantry as before, plus several company options there was not space for last time. These include the Sayur (reconnaissance), Magach 6 (M60) and Tiran (captured T55) tank companies, and M113 mechanised companies. The revised point system better allows Israeli players to incorporate infantry and artillery support into their forces than before. Israeli aircraft remain as formidable as ever, in the face of more Arab anti-air threats. The addition of new Arab weapons and units will give their forces a boost. Egyptian players gain access to the specially trained Thunderbolt assault commando battalions that led the Suez canal crossing. Armed with new anti-tank (AT3 Sagger guided missiles) and anti-aircraft (SA7 surface to air missiles) weapons, Egyptian and Syrian infantry will now be much more capable of defending themselves against marauding Israeli tanks and aircraft. Other new state of the art Soviet equipment, including the T62, BMP1 armoured fighting vehicle, and ZSU23 “Shilka” anti-aircraft tank will give Arab player a far wider range of quality and quantity of unit choices.

Jordan played a smaller role in 1973, but gains major weapon upgrades that occurred between 1967 and 1973. For example Jordanian player’s Centurion tanks may now be upgraded to have the British L7 105mm tank gun, to fight it out on equal terms with Israeli tanks. Combined with already good infantry and transport options, the Jordanian army remains capable. Jordan has the best command ratings of any Arab force, thanks to its cadre of British trained NCOs.
Plastic Fantastic! The range of plastic boxed sets suitable to build Fate of a Nation armies has grown again. With Team Yankee and ‘Nam released, there are already plastic kits available for vehicles like the Magach-6 (M60), M113, T-34, T-55, BTR-60, and BMP. The new plastic T-62 is also being released to for this book. This will make fielding some of the numerically large Arab force options with many tanks and AFVs much more practical for players. Packs of the unit cards for each nation will be available for separate purchase for players with existing armies, again similar to the card pack releases for ‘Nam.

FOAN, ‘Nam and Team Yankee?
Forces in ‘Nam and Fate of a Nation have been costed using the same points system. This means players could pit ‘Nam and FOAN forces against each other, giving a wide range of historical and non-historical games. Special rules needed to cover elements unique to ‘Nam, such as helicopters, wounded and medivac, and riverine fighting rules, are included in the ‘Nam mission rules.
~Scott

Fate Of A Nation is our latest book depicting the Arab-Israeli wars, from the Six Day War in 1967 to the Suez Crossing in 1973, Fate Of A Nation lets you create these battles. With the book releasing in just over two weeks we’ve enlisted the help of our community partners who have done previews of what is in the book and even some historical background for those who might not be familiar or want a refresher. Breakthrough Assault – Fate Of A Nation Preview
Lee shares his thoughts on the new Fate Of A Nation book. Inside he takes a look at some select units such as the the Israeli Magach 6, the new T-62 and Thunderbolt Company for Egyptians, the Syrian BMP-1 and the Centurion used by the Jordanian Army. Lee also notes the changes made as Fate Of A Nation uses the Team Yankee rules and points system that even allow the books forces to be used with the ‘Nam Book and model range.

No Dice No Glory – Fate Of A Nation Preview and Forces
The team has been hard at work over on No Dice, No Glory. After their initial look at the books rules and an overview of all the different Nations Force Diagrams they dived right into each faction showing off the tanks, troops and support for each of the Nations in Fate Of A Nation. They cover quite a lot so it is worth checking out each of their articles linked below.