The M51 Isherman was developed in direct response to the ever growing number of IS-3 and SU-100 in the arsenals of the Arab nations. It was the French that first came to the aid of the Israelis in the form of the CN-105-F1 gun. However, the high muzzle velocity created a recoil length that was far too great fit inside the Sherman turret in its standard configuration.

Check out the Isherman (105mm) in the online store here…

The Israeli solution was simple; reduce the barrel length by 1.5 meters to lower the muzzle velocity and add a muzzle brake to further reduce the amount of recoil. The modified version of the gun was designated the D1504 L/44 and was mounted inside the modified turret of a M4A1 (76)W HVSS (Horizontal Volute Suspension System) Sherman.

Powered by a Cummins 460hp diesel engine, the M51 also included modifications to steering, transmission and exhaust systems. Ammunition stowage was also adapted for the D1504 gun which was mounted in newly designed gun mantlet.  Other design features included 95mm smoke dischargers fitted to the side of the turret and a new turret bustle. These modifications pushed the overall weight from the original 39 tons to 46 tons; this gave the M51 a top speed of 45kmph and an operation range of 270 kilometres.

While the first M51s were rolled out in 1962, it wasn’t until 1967 that it was first used operationally during the border skirmishes with Syrian just prior to the Six-Day war. The M51 remained in Israeli service during the forthcoming War of Attrition and into the Yom Kippur War in 1973 where it was capable of vanquishing more modern designs such as the Soviet built T-62 that were being fielded by the Syrian and Egyptian forces. 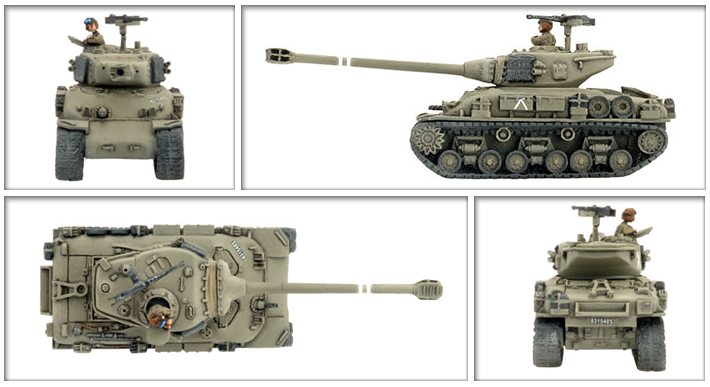